Write your own story 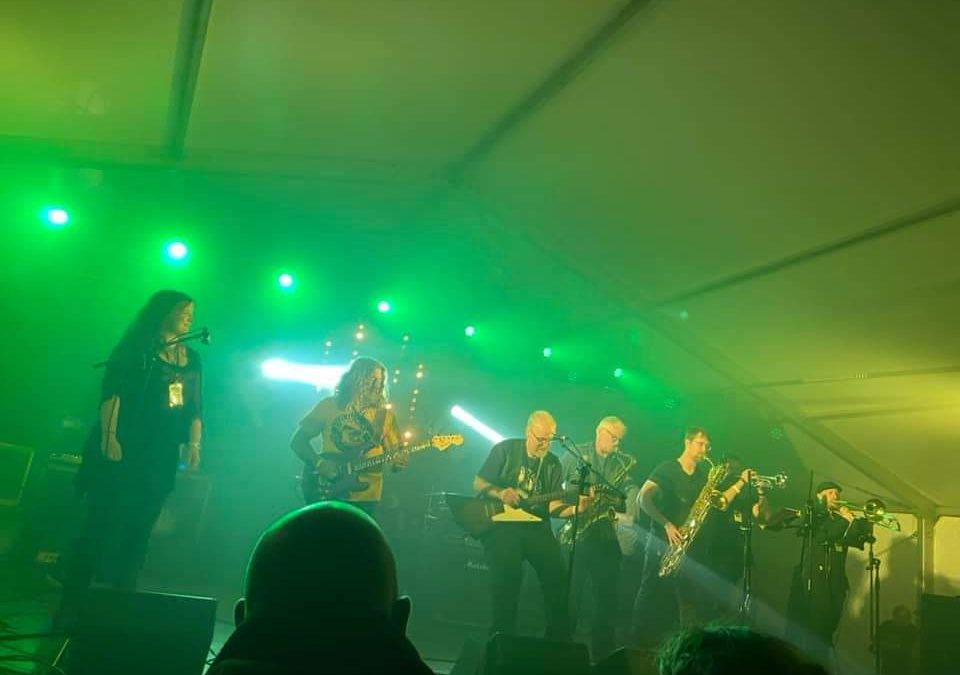 When I saw this photo, I felt drawn to write something about it. It captures an experience that left my heart bursting with joy, and my face sore from smiling.

Last weekend, my husband’s band played live together for the first time in almost two years. It was a big event with bands, bikes, and a custom show in the North of England. We weren’t even sure it would go ahead because of COVID.

But it did go ahead, and what a weekend we had. The band brought in a horn section with a tenor sax, trombone, and trumpet player to add to their existing 6-piece. What an amazing sound, and it was an incredible, energetic atmosphere as they opened the first night. And, for one song, I was up there with them singing harmonies.

I almost chickened out. We’d talked about me doing it the night before and I hoped a couple of the other girls would get up and sing too. They decided not to, and a wee voice inside me said “it’s too scary, there will be hundreds of people in there”. And then I felt a strong sensation in my gut that said “but you know you want to!”.

I said I might have done it if we’d had the chance to practise, and left it there. Not for long though, as seconds later one of the guys started playing the opening chords of the song on his guitar. So, we were practising – there and then! I knew in that moment it was going to happen.

I realised I’d been letting stories run in my head. If I’d believed them, I would have missed out big time.

Next thing it’s the following night and I hear the opening chords again. I show my backstage pass, run to the steps of the stage, take a deep breath, and go for it. I am greeted by the guys in the band, supportive and encouraging, grinning with thumbs-up. I feel very aware of the bright, colourful spotlights and the crowd filling the huge marquee. Catching my eye in the front row are my sister and daughter and several of our friends, smiling and cheering me on.

It’s a great feeling to be joining in with these talented musicians, picking up on their happy vibe, loving playing together, and it gives me the courage to sing up and enjoy every second. I’m only singing a few lines after all, and I let self-consciousness slip away and give way to connection and flow. I notice everything with heightened senses, hearing each voice and instrument through the monitors, especially the horn section who sound fantastic, seeing the lit-up faces of hundreds of people who have probably not seen and heard live music for a couple of years. What a privilege to be part of it.

At the end, I feel a rush of joy and gratitude for having the opportunity to do this, and I’m greeted by big squeezy hugs and more encouragement from our pals at the bottom of the stage steps.

Life has taught me – and continues to teach me – to do the things I want to do, be in-the-moment, and make things happen, even when the little voices of doubt creep in. I think the trick is to listen, sit with it, and then decide for yourself. Instead of letting the stories run in my head, I wrote my own story that night.

And the spirit of adventure, joy, and laughter carried through the whole weekend. I felt a deep sense of connection and had such uplifting conversations with friends who keep showing up for us again and again. Love and support flowed for both me and my husband as we heard many offers to push his wheelchair, get anything he needed, and help with whatever would help him continue to go to events like this, even though he thought this might be his last.

I’m pretty sure this won’t be the last – that’s just a story that can be rewritten 😉.

If you are curious about the stories we tell ourselves and the impact this can have, you might like to read my book, ‘Roots for Growth’, where I explore the topic extensively.

We use cookies on our website to give you the most relevant experience by remembering your preferences and repeat visits. By clicking “Accept All”, you consent to the use of ALL the cookies. However, you may visit "Cookie Settings" to provide a controlled consent.
Cookie SettingsAccept All
Manage consent

This website uses cookies to improve your experience while you navigate through the website. Out of these, the cookies that are categorized as necessary are stored on your browser as they are essential for the working of basic functionalities of the website. We also use third-party cookies that help us analyze and understand how you use this website. These cookies will be stored in your browser only with your consent. You also have the option to opt-out of these cookies. But opting out of some of these cookies may affect your browsing experience.
Necessary Always Enabled
Necessary cookies are absolutely essential for the website to function properly. These cookies ensure basic functionalities and security features of the website, anonymously.
Functional
Functional cookies help to perform certain functionalities like sharing the content of the website on social media platforms, collect feedbacks, and other third-party features.
Performance
Performance cookies are used to understand and analyze the key performance indexes of the website which helps in delivering a better user experience for the visitors.
Analytics
Analytical cookies are used to understand how visitors interact with the website. These cookies help provide information on metrics the number of visitors, bounce rate, traffic source, etc.
Advertisement
Advertisement cookies are used to provide visitors with relevant ads and marketing campaigns. These cookies track visitors across websites and collect information to provide customized ads.
Others
Other uncategorized cookies are those that are being analyzed and have not been classified into a category as yet.
SAVE & ACCEPT